A Few Words From St Paul, a Jew From Tarsus

Prologue to Faith, Hope, and Charity

“Abraham believed God and it was credited to him as righteousness,

Now, faith is the substance of things to be hoped for, the evidence of things that appear not.  For by this the ancients obtained a testimony.
(Hebrews 11:1-2)

We come to the Theological Virtues from having discussed the transition from the external grace of the Mosaic Law, to the interior grace, sanctifying grace that comes to us from the “fullness” of Christ and the sacraments that he instituted, beginning with Baptism, the infusion of grace and the indwelling of the Holy Spirit.  In moving from the sacramental economy to virtue, I made the distinction between infused salvific virtue, operating in sanctifying grace, which together with the Holy Spirit, enable us to attained God’s promise of salvation; and acquired virtue, the practice of a good and moral life for the temporal well-being of persons and the flourishing of community.  This latter form of virtue, acquired virtue, for the attainment of temporal good, is something that is intrinsic to human nature and can be practiced and fruitful whether a person is baptized or not, or whether a person is a believer or not.

This now needs to be qualified.  The Catechism of the Catholic Church (CCC) and St Paul in his theology of justification, makes it clear that the Sacramental economy is in continuity with God’s original Covenantal economy.  The sacraments are outward signs of the New Covenant in continuity with the outward signs of the Old Covenant, such as circumcision which is part of the external grace  of the Mosaic Law.  The term “unbaptized,” in relation to salvation is in reference to “un-covenantal,” those outside of either of the covenantal economies.  The acquired temporal virtue practiced by those outside the Covenants, can only result in temporal good.

salvation for those to whom the Gospel has been proclaimed and who have had the possibility of asking for this sacrament.  The Church does not know of any means other than Baptism that assures entry into eternal beatitude; this is why she takes care not to neglect the mission she has received from the Lord to see that all who can be baptized are “reborn of water and the Spirit.”  God has bound salvation to the sacrament of Baptism, but he himself is not bound by his sacraments.

Salvation, as St Paul explains below, and as it is revealed in the Book of Revelation (cf. Rev 7:4, 9) is for the “one hundred and forty-four thousand of every tribe of the children of Israel;” and the “great multitude of all the nations, tribes and Peoples, standing before the throne in white robes.”

In the following passages from St Paul, although they may be verbose, in their intricacies they reveal that because of the patriarchs “the gifts and call of God” to the original People of God, “are irrevocable.” (cf. Rom 11:29)  Furthermore, the center of Paul’s discourse on this is that “Abraham believed, and it was credited to him as righteousness;” (cf. Gal 3:6) and that the Law came 430 years after Abraham’s faith, which justified him.  (cf. Gal 3:17)

It is important that we read these passages before we move into the salvific virtues, so that we may 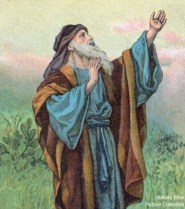 confirm that the theology of salvific sacramental economy of virtue does not exclude the Jews, who, in the roots of Judaism, are a Messianic people who have faith in the God of Abraham, who is the same God of Jesus Christ.

St Paul’s discourse here leads us to the definition of faith given to us in the Letter to the Hebrews (11:1-2): Now, faith is the substance of things to be hoped for, the evidence of things that appear not.  For by this the ancients obtained a testimony.

But first a few words from St Paul, a Jew from Tarsus.

Romans 11:1-8
I ask, then, has God rejected his people? Of course not! For I too am an Israelite, a descendant of Abraham, of the tribe of Benjamin.  God has not rejected his people whom he foreknew.  Do you not know what the scripture says about Elijah, how he pleads with God against Israel?

“Lord, they have killed your prophets, they have torn down your altars, and I alone am left, and they are seeking my life.”  But what is God’s response to him?  “I have left for myself seven thousand men who have not knelt to Baal.”  So also at the present time there is a remnant, chosen by grace.

But if by grace, it is no longer because of works [of the Law;] otherwise grace would no longer be
grace.  What then?  What Israel was seeking it did not attain, but the elect [the remnant] attained it; the rest were hardened, as it is written: “God gave them a spirit of deep sleep, eyes that should not see and ears that should not hear, down to this very day.”

Romans 11:25-29
I do not want you to be unaware of this mystery, brothers, so that you will not become wise in your own estimation: a hardening has come upon Israel in part, until the full number of the Gentiles comes in, and thus all Israel will be saved, as it is written:

“The deliverer will come out of Zion, he will turn away godlessness from Jacob;
and this is my covenant with them when I take away their sins.”

In respect to the gospel, they are [in opposition] on your account; but in respect to election, they are beloved because of the patriarchs.  For the gifts and the call of God are irrevocable. 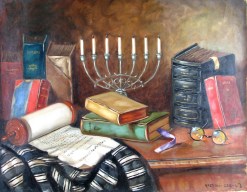 one will be justified. . .  for if justification comes through the law, then Christ died for nothing.

Galatians 3:5-9
Does, then, the one who supplies the Spirit to you and works mighty deeds among you do so from works of the law or from faith in what you heard?  Thus Abraham “believed God, and it was credited to him as righteousness.”  Realize then that it is those who have faith who are children of Abraham.  Scripture, which saw in advance that God would justify the Gentiles by faith, foretold the good news to Abraham, saying, “Through you shall all the nations be blessed.”

Consequently, those who have faith are blessed along with Abraham who had faith. 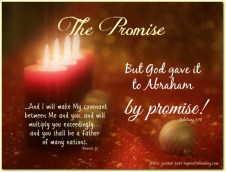 Now the promises were made to Abraham and to his descendant.  It does not say, “And to descendants,” as referring to many, but as referring to one, “And to your descendant [seed,]” who is Christ.  This is what I mean: the law, which came four hundred and thirty years afterward, does not annul a covenant previously ratified by God, so as to cancel the promise.  For if the inheritance comes from the law, it is no longer from a promise; but God bestowed it on Abraham through a promise.

Why, then, the law?  It was added for transgressions, until the descendant came to whom the promise had been made; . . . Before faith came, we were held in custody under law, confined for the faith that was to be revealed.  Consequently, the law was our disciplinarian for Christ, that we might be justified by faith.  But now that faith has come, we are no longer under a disciplinarian.  For 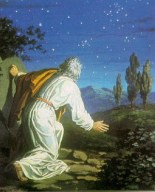 through faith you are all children of God in Christ Jesus.

For all of you who were baptized into Christ have clothed yourselves with Christ. . . And if you belong to Christ, then you are Abraham’s descendant,
heirs according to the promise.

James 2:23
Abraham believed God and it was credited to him as righteousness;
and he was called “the friend of God.”

Hebrews 11:1-2
Now, faith is the substance of things to be hoped for, the evidence of things that appear not.
For by this the ancients obtained a testimony.