Doing of Good and Avoiding of Evil
Synderesis

One of the positive things that came out of the 2015 Synod is the opportunity to look anew at the concept of conscience.  Moral behavior or let’s start with human behavior, that is to say, the things we do as deliberate and decisive acts, is governed by the powers given to us as rational creatures.  Made in the image and likeness of God, we are spiritual beings with the capacity to think or rationalize.  The powers given to us by God that make up this complex ability to choose and act are the faculties of the soul itself.  As these faculties are intrinsic to human nature, each human soul is created with the Noble faculties of Intellect and Will and the Lesser faculties of Passion and Appetite.  The Intellect is oriented (ordered) to seeking and acknowledging truth and the Will is ordered to seeking and acknowledging good.  The faculty of Passion is given to us as a way of acting or reacting to and into the world around us.  The faculty of Appetite is given to us as a means of seeking the resources necessary to sustain ourselves as bodily creatures.  God, in His eternal Wisdom has also provided us with Sanctifying Grace, a supernatural sustenance that gives us the power of ordering the spiritual faculties to their proper purpose; with the first general ordering of the Lesser faculties to the Noble faculties; which in turn orients the person to God.  In other words, the way the Passions want to act or react to and into the world should be governed by the Intellect and Will, guiding the Passions in a way of acting that is both true and good in relation to the stimulus and consequences.  Likewise, what the Appetites want in regards to resources, should be governed the same way, as to whether what is desired is true and good in relation to our wellbeing.  This proper ordering, with the assistance of Sanctifying Grace, enables the practice of virtue, which is the manifestation of good and true acts.  There is a distinction however.  Good and true acts that provide for our temporal wellbeing (this person) and the benefit of others around us (common good of community,) can be done, unaided by Grace, because human nature, even in disorder, is ordered to temporal good; although there is often mistakes made as to what is good and true.  As mentioned above the ultimate proper ordering of the human being, aligned by Sanctifying Grace, is an ordering of the person to God.  Virtue that tends toward the objective of that graced ordering (person to God) is virtue that tends toward attaining God’s promise of Salvation.  As St Paul says in Philippians (2:12) we must “work out our Salvation with fear and trembling.”  This is virtue working toward a good and true objective that goes beyond the temporal kind and can only be done with the aid of Sanctifying Grace. 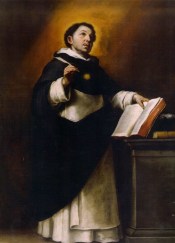 The Intellect and Will working together is what we call reason.  Reason, St Thomas Aquinas tells us, is that from which laws are promulgated or prudent action taken.  A law, promulgated from reason, is that which governs what we should or should not do.  Law, however, is most often thought of as external.  Within the human soul, on the other hand, the proper ordering of the faculties is an internal law, reason itself, aided by Grace, guiding our actions for the good of our own person and the good of the community we find our self in.  This internal law of reason is what we call conscience.  In comparing those who have the Mosaic Law, an external law given by God, to those who do not have the Mosaic Law, the Gentiles, St Paul says that those Gentiles 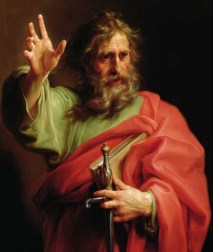 “who do not have the law, [but] by nature observe the prescriptions of the law, they are a law for themselves even though they do not have the law. They show that the demands of the law are written in their hearts, while their conscience also bears witness and their conflicting thoughts accuse or even defend them on the day when, according to my gospel, God will judge people’s hidden works through Christ Jesus.” (Rom 2:14-16)

Here St Paul gives us all that we need to know about conscience; however, it is worthwhile, as the Church has done in the Catechism (CCC 1776-1802), to expand on St Paul’s theology of conscience, for clarification and specification (application.)  Let’s look at the key elements of St Paul’s exhortation.  A very important part of what Paul says is that [some] Gentiles act “by nature” according to the precepts of the external [Mosaic] law which they do not have.  “By nature;” in other words, the precepts of the external law, what the law prescribes, is intrinsically inscribe in human nature and can be discerned.

The paragraph in the Catechism (#1776) that set this as a premise for the subsequent paragraphs on Moral Conscience puts it this way:

“Deep within his conscience man discovers a law which he has not laid upon himself but which he must obey. Its voice, ever calling him to love and to do what is good and to avoid evil, sounds in his heart at the right moment…. For man has in his heart a law inscribed by God…. His conscience is man’s most secret core and his sanctuary. There he is alone with God whose voice echoes in his depths.”  (CCC 1776)

Our conscience, St Paul goes on to say, “bears witness” to our conflicting thoughts, which, on the day of judgment will “accuse” us (those thoughts conflicting with our conscience) or defend us (those thoughts conflicting with the contrary thoughts.)  In the conflicts of thought that goes on within our soul, in our conscience, we choose (a) to act incorrectly (thoughts that accuse) or (b) to act correctly (thoughts that defend us.)  In either case let’s not “split hairs” between thoughts and action; Jesus tells us that thoughts that are allowed to linger and affect our faculties, are active thoughts (cf. Matt 5:28;) on the other hand thoughts in the form of temptation that are repressed, do not constitute active thoughts.

In both St Paul’s version and the Catechism, it is important to note that “the demands of the law are written in our hearts” and what is written is a law “that we discover,” and that we “have not laid upon our self.”  Just as the law written on the Tablets of Stone [Ten Commandments] are the written voice of God, the law written in our hearts is the same voice of God, not our voice.  Without the external law, in other words, man should be able to do good and avoid evil by the precepts of human nature.  God has written the law in human nature and each human soul, an instantiation of human nature, is imprinted with this law of reason that is called conscience.

The importance of all this rhetoric is that our conscience is not something we establish.  This is where the diversion of personal preference is mistaken or substituted for the conscience given to us by God.  This substitution is accompanied by restating the principle of Do Good and Avoid Evil into a paraphrasing more suitable to modern preferences: Seek Pleasure and Avoid Suffering.  These two axioms have completely different meaning; Doing good is not always pleasurable and avoiding suffering is not the same as avoiding evil.  Suffering is caused by evil, but is not evil in itself.  Good can come out of suffering, but nothing good can come from evil.  There is much to say on the topic of human suffering, but that will have to wait for another time.

In the paragraph from the Catechism cited above (1776,) it is interesting that it says that the voice of conscience (God’s voice) “sounds in the heart at the right moment.”  There is a wonderful word that comes to us from Medieval Scholasticism, Synderesis, which is this “sounding.”  Synderesis (or sometimes Synteresis,) according to the Catholic Encyclopedia, is

a term used by the Scholastic theologians to signify the habitual knowledge of the universal practical principles of moral action. The reasoning process in the field of speculative science presupposes certain fundamental axioms on which all science rests. . .  These are the first principles of the speculative intellect. In the field of moral conduct there are similar first principles of action, such as: “evil must be avoided, good done“; “Do not to others what you would not wish to be done to yourself”; “Parents should be honored”; “We should live temperately and act justly”. Such as these are self-evident truths in the field of moral conduct which any sane person will admit if he understands them. According to the Scholastics, the readiness with which such moral truths are apprehended by the practical intellect is due to the natural habit impressed on the cognitive faculty which they call synderesis. While conscience is a dictate of the practical reason deciding that any particular action is right or wrong, synderesis is a dictate of the same practical reason which has for its object the first general principles of moral action.  [emphasis added]

Synderesis, therefore, is the underlying “readiness with which” moral truths (principles, beginning with “do good, avoid evil”) are known to the faculties of Intellect and Will.  It is that “sounding at the right moment.”  Synderesis, brothers and sisters, is that by which a human person cannot not know what is good and what is evil.  The problem occurs, as it did in the Garden of Eden, when we try t 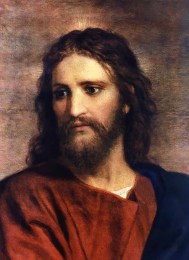 Consistently choosing good and rejecting evil, following our true conscience in particular categories of action is what is called the practice of virtue.