[Before returning to Conscience and Virtue, a brief excursive.]

In the realm of intellectual thought, philosophy is the rational science which provides the structure, grammar and linguistic mechanics for the speculative process of making assertions of reality; assertions as to what is real and true.  To say that it is a “speculative process,” however, is not to say that it is imaginative or that the result of the speculation, the assertion, is a matter of opinion or “wishful thinking.”  Rational speculation is a building upon principles (self-evident truth,) and previously demonstrated truths to come to a conclusion that is true because the underlying elements of thought are true.  The conclusion, however, is not true if one or more of the building blocks are not true.  I’m sure some philosophical contrarians would argue against this proposition; but they would be arguing against reason.  Even when one moves into the science of theology, philosophy is still the rational framework by which theological speculation is done.  For this brief essay however, and since the philosophical science serves theology, philosophy is the landscape of the rhetoric. 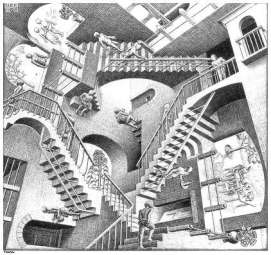 Post-modern or contemporary philosophers, as it were, do philosophy by way of a continual denial of objectivity as a first move.  The examples that prompted this essay are found in The Stone’s blog post of November 2, 2015 titled How to Live a Lie.  The blog essay addresses three concerns of reality, belief in (a) God, (b) free will, and (c) objective morality.  The writer, William Irwin, begins with morality and proceeds to the other two demonstrating his thesis that “we can act as if God, free will, and objective morality exist even when we are certain they don’t.”  Mr. Irwin, a professor of philosophy at King’s College, cites various philosophers who present fictionalism as a philosophical form, applying it to the these three concerns of reality.  It is not my intention to critique Prof. Irwin’s essay in its entirety or post-modernity for that matter; I will only present particular excerpts and paraphrasing that seem to support my thesis of duplicity of the negations in relation to the assertions.  I will present them and point out the two components, allowing you, the reader of this essay, to discern whether there is duplicity.  After presenting the examples I will conclude my essay with a perspective on why, if there is duplicity, the philosophers (Prof. Irwin, et. al.) don’t see it, hence my title Philosophical Blindness.

Quoting a philosopher, Richard Joyce, Prof. Irwin presents Joyce’s proposal of fictionalism, as it applies, first to morality, then God, and finally free will.  Denying objective morality is used here as though contemporary philosophy, superseding all previous genres, has come to the consensus that there is no such thing; and rather than demonstrating that there is no such thing, it is posited as a principle from which to do philosophy.  Accordingly, to consider anything to the contrary (i.e. that there is objective morality) is foolishness.  Yet, given the observable appearance that human acts are influenced by (at least) the concept of objective morality, the contemporary philosopher has the task of explaining this phenomenon.  Joyce’s fictionalism is an explanation that is viable enough to catch on in post-modernity, but propositionally invalid in its dialectic.  Prof. Irwin summarizes the phenomenon –– “this ‘illusion’ [of] belief in objective morality” –– as having “evolved to provide a bulwark against weakness of the human will.”  Given the asserted principle of denial of objective morality, Prof. Irwin then says, “A claim like ‘stealing is wrong’ is not true, because such beliefs have an evolutional basis but no metaphysical basis.”  What the post-modernists mean by objectivity having no metaphysical basis is that in being itself there is no judgmental influence or elements of affectivity.  According to their philosophical principles, things just are, they are not, in themselves, aligned to or in bias of any other thing or things.  For something affective such as morality to be objective, it would have to exists in being as does the things themselves.  Existing affectivity is what has been proposed, by prior (supposedly superseded) philosophies, as the characteristics of particular essences or natures (in this case human nature).  Given post-modernity’s certitude of the absurdity of metaphysical affectivity, the foregone conclusion must therefore be that the illusion of objective affectivity is, in fact, evolved affectivity; ingrained by habit.

Having made this move away from metaphysical morality to evolved morality, Prof. Irwin continues his application of Joyce’s fictionalism by supposing that there are times when “we want to avoid the weakness of will that would cause us to act imprudently.”  In such situations, as “moral fictionalists,” we would appropriate the illusion of objective morality in the statement that “stealing is wrong,” and acting accordingly, would make the prudent decision not to steal even though we want to steal.  Notice here that not stealing is an evolved rather than metaphysical concept, yet prudence in opposition to the desire to steal is not given to consideration either way.  For the post-modernist then, is prudence an objective concept or evolved affectivity.  What is prudence?  Herein lies my thesis.  In pretending to believe that there is objective morality and therefore that stealing is wrong, am I also momentarily pretending there is such a thing as prudence?  The concise dialectic is, given the desire to steal, there is no such thing as objective morality, but there is such a thing as prudence (seemingly objective).  Said another way, the post-modernist perspective is that the statement “stealing is wrong” is not true, but it is true that not stealing is prudent.  In further self-contradiction of non-objectivity, Irwin paraphrases Joyce in saying that rather than morality (e.g. stealing is wrong) being objective it is mythological and in being so it “conveys a deep truth about human nature despite being literally false.”  Joyce, says Irwin, therefore “counsels us to voluntarily cultivate moral fictionalism;” presumably because it can provide us with a prudent well-being. The dialectic is intensified as: there is no metaphysical objective morality, yet there is a “deep truth in human nature” that warrants prudent acts.

I could go on to extrapolate Prof. Irwin’s dialectic on belief in God or the existence of freewill (he says no to both, but pretending they are is comforting;) going on about it would only be multiplying the circular dialectic.  Pretending to belief in God, for instance, provides pleasant social interaction; in other words, pretending to love God facilitates reciprocal love of neighbor.  And finally, pretending that I have free will alleviates the anxiety of thinking that I don’t.  Read the essay for an entertaining exercise in post-modern self-contradiction.

In conclusion, from a classical philosophical perspective, this philosophical blindness is rooted in the denial or avoidance of acknowledging a broader, transcendent metaphysics with an intention of objective affectivity intrinsic to being; that is to say, the existence of universals having operative characteristics recognizable in particulars.  The latter concept is undeniable, observable, influenced behavior; the former, for post-modernists, must be denied lest they be face with metaphysical intention, which can only lead to one thing; with intention in being there must be One who has expressed that intention and therefore has expressed being itself.  Metaphysics without intention is merely a philosophical playground.